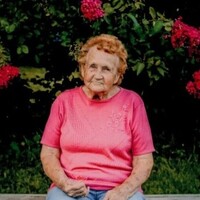 Viola Fay Van Winkle Smith Weaver was born on May 2, 1933 to Rhoda Bradshaw and Otho Blanks.  She departed this life on December 18, 2020 at her home in Winona, Missouri.

She was married to Leonard Smith on May 4, 1948.  They were blessed with three children; Earlene, Dennis, and Dora. She was baptized into the Baptist faith on October 25, 1964. She married Frank Weaver on June 1, 1979.

Viola had a very strong work ethic that was shown to her in her early childhood by her stepdad.  She worked for 38 years at Paramount. After she retired, she went to work for the forest service and continued there for another eight years. She also volunteered at the Shannon County Food Pantry for eight years where she kept in touch with many of her friends and made new ones.

Viola was a strong woman who loved her family, her flowers, and to sew.  She was an avid gardener whose yard was the envy of many. She sewed quilts, clothing, and toys for many. She embroidered and cross-stitched beautiful pieces that could have been called art. Her family was her life and she was our strength.

She will be missed by so many and will leave a gap that will never be filled.

“Our family chain is broken, And nothing seems the same, But as God calls us one by one, The chain will link again.”

Funeral services will be held at 10:00 a.m. Tuesday, December 22, 2020 at Yarber Mortuary, Winona, Missouri with Pastor Kerry Honeycutt officiating.  Interment will be in Mt. Zion Cemetery, Winona, Missouri.  Memorial contributions may be made to St. Jude Children’s Research Hospital.  Condolences may be expressed at www.yarbermortuary.com.