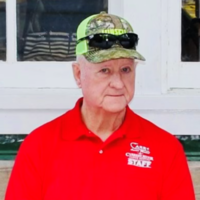 Harold Dean Banks was born to Earl and Hazel Banks on September 8, 1942, on the family farm at Round Springs, Missouri.  He departed this life on December 22, 2020, in Springfield, Missouri at the age of 78. Harold met and married Betty Lou Ard at the young age of 18 years old, and they celebrated 60 years of marriage on December 1st of this year.  To this union, they raised 3 children: Teresa, Lesa, and Tim.

Most people know him as Windy, a nickname given to him because of the big squirrel hunting tales he would tell as a young boy.  Windy and Betty made their first home of 17 years in Brooklyn, Illinois.  In his early years, Windy began working in timber alongside his father-in-law, Ray Ard, and eventually built his own logging business.  An expert in the timber cutting industry, Windy was recruited by many states to harvest the production of their Walnut timber.  He was regularly flown to Wisconsin, Minnesota, Illinois, and many other places across the United States. In 1973, Windy purchased the family farm at Round Springs where he moved his family in 1975 at Christmas time.  It is here that Windy instilled a strong work ethic in each of his children and raised them to be hard workers just as he was.  After 18 years of farming, Windy and Betty left the homestead and built their new home north of Eminence to enjoy a new chapter in their later years together. Finishing up his logging career, Windy worked alongside his son, Tim, and son-in-law Mitch for more than 20 years.  According to Mitch, “no one could cut a tree like Windy Banks.”

Windy was an avid deer and turkey hunter as long as he could see or hear them coming.  He spent many years hunting alongside his children and grandchildren as well as extended family and friends including the many members of the Spring Valley Buck Busters.  Windy enjoyed fishing and gigging, and fish fries on the banks of Current River.  For years, he loved to golf with his sister, Carol, and his grandson-in-law, Joe, and many other golfing buddies.  Windy worked several years for his sister, Carol, and nephew, Stacy Smith, at Carr’s Canoe Rental and enjoyed his summers as a bus driver and had many stories to tell as he never met a stranger.  He lived life to the fullest.  The hero of the Banks family will forever be missed by his wife and children as well as the grands and the greats.

In his final hours, Windy told Betty that God had been talking to him for days and his family is rejoicing and believing that he came to Jesus. Windy will be laid to rest at Pilgrim’s Rest Cemetery in Timber, Missouri.

Funeral Services will be held at 10:00 a.m. Monday, December 28, 2020, at Yarber Mortuary, Eminence, Missouri with Pastor Randy Ferguson officiating. Visitation will be held Sunday evening from 6-8:00 p.m., also at the funeral home. Interment will be in Pilgrim’s Rest Cemetery, Timber, Missouri. Memorials may be made to Autism Awareness of SE Missouri. Condolences may be expressed at www.yarbermortuary.com.